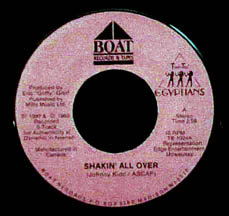 SONGS
Shakin’ All Over (Johnny Kidd)
In The Sun (Stephen Trier)

COMMENTS
Remember 45 RPM records? We only did this because we won the Lipsky’s battle of the bands – 1st prize was a 45 RPM record recorded FREE. Juke boxes at the time still played 45’s, so they came in handy for that and promotional use. I always liked this record, we did a cover so we could get Kurt Calder’s voice on record, Steve sang most of the recorded lead vocals as he wrote the original material for this band. Kurt had such a great voice, though, we really wanted to get something out with him singing. This song was one of our bigger live covers at the time, so that’s how we recorded a 45 RPM record with a cover on it. The other song was an original we weren’t going to use on the Electric Lady sessions coming up later in the year, so it wound up here. It’s a very light, poppy song that I enjoy very much, this was a fun recording to do. It was also our first time using a real producer.